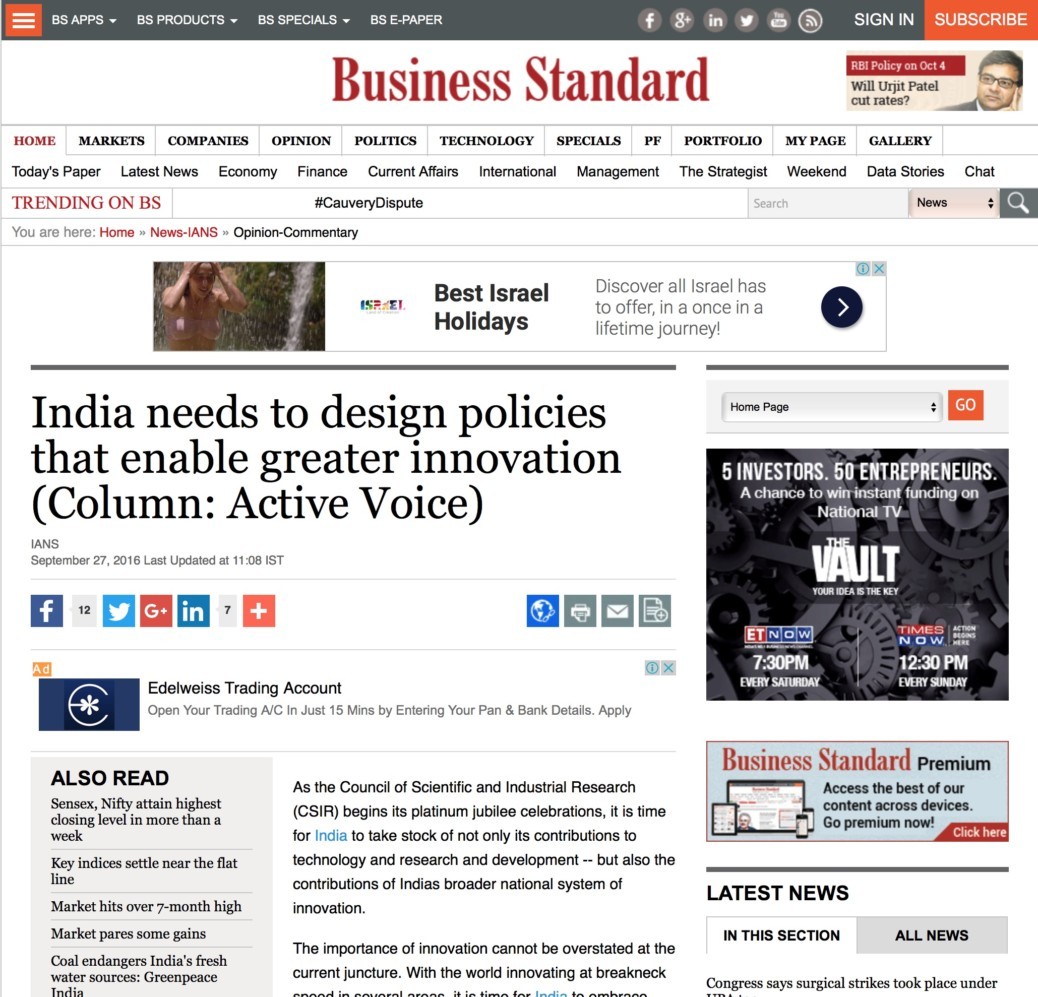 As the Council of Scientific and Industrial Research (CSIR) begins its platinum jubilee celebrations, it is time for India to take stock of not only its contributions to technology and research and development — but also the contributions of Indias broader national system of innovation.

The importance of innovation cannot be overstated at the current juncture. With the world innovating at breakneck speed in several areas, it is time for India to embrace innovation as a paradigm and a long-run principle for making it more competitive.

Several schemes and institutions before and several schemes under the present dispensation do have an innovation focus. But what is needed is policy coherence over a longer time-frame. In this regard, the work of individuals and bodies like the National Innovation Foundation (NIF) becomes important. A critical element is the innovation environment — the conditions for innovation to take place.

A forthcoming report done by us (due for release on September 30) does look at some of these elements, sourcing data from secondary sources for constructing a composite index of innovation at the state level in India. Apart from this, the report also looks at other aspects of innovation and does seek to provide direction to improve India’s innovation performance over the longer time frame. The distinct learning and findings that emerge from the report are:

First, India needs to improve its performance at the national level. Several countries like the US, Israel, Sweden and, increasingly, China have invested greatly in R&D efforts and continue to do so. These have helped them reap rich dividends.

This is because such efforts have been instrumental in the development of inventions that lead to innovations and globally-competitive industries over time. It starts with increasing the R&D spend as a percentage of GDP. The need is also for making research a preferred career choice, as researchers per capita are at dismally low levels in India.

Another crucial area to focus on is creative outputs like publications, patents, copyrights and industrial designs, et al. India is continuing to become more robust in this regard but much needs to be done to improve further.

Another related area is the policy regime. Better design of laws and policies in crucial areas like industrial policy, intellectual property rights, foreign direct investment, and greater coherence between these and other areas that have a bearing on a national system of innovation will help in better innovation performance in India.

Second, at the state level, the performance of innovation shows a mixed bag. The index does work out a categorisation, with eleven indicators being used for building a stage of development. At the top of the Index are states like Maharashtra, Tamil Nadu, Karnataka and Gujarat. In various categories stacked from the most innovative to the least innovative states, the top performers in each category include Delhi, Uttarakhand, Goa, Sikkim and Mizoram.

At the state level, another imperative is improving linkages between state-level universities, MSMEs and R&D institutions. Even in states that do relatively well on innovation, few policies at present exist for improving the innovation and entrepreneurship ecosystem. Over time, more policies like the one existing in Karnataka for innovation called the “I4 Policy” need to come up.

Third, at a sectoral level, some sectors in India have done well while others show potential. An overarching theme is that several sectors have moved from a technology push to a more collaborative and open approach. Another important point is that the teaching and research ecosystem, which is linked to specific sectors, does have a positive impact on development of the sector and sectoral innovation.

The sectors that have done so are able to reap rich dividends with several private research labs coming up in distinct locations and the sectors becoming globally competitive over time. These include the automobiles, pharmaceuticals, food processing and biotechnology sectors.

The defence production sector has had several impediments over time and despite the good work of research organisations like DRDO and its production organisations there is a tremendous cost to the nation. It is because India has had to import the bulk of its defence equipment and this has a huge bearing, as costs of procurement from outside are exorbitantly high. The government now seems to be moving in the right direction.

Over time, policymakers must take these considerations into account for designing policies that enable greater innovation. The focus must also be on greater research on how to improve the country’s current innovation ecosystem.

Published in Business Standard on September 27, 2016. To know more