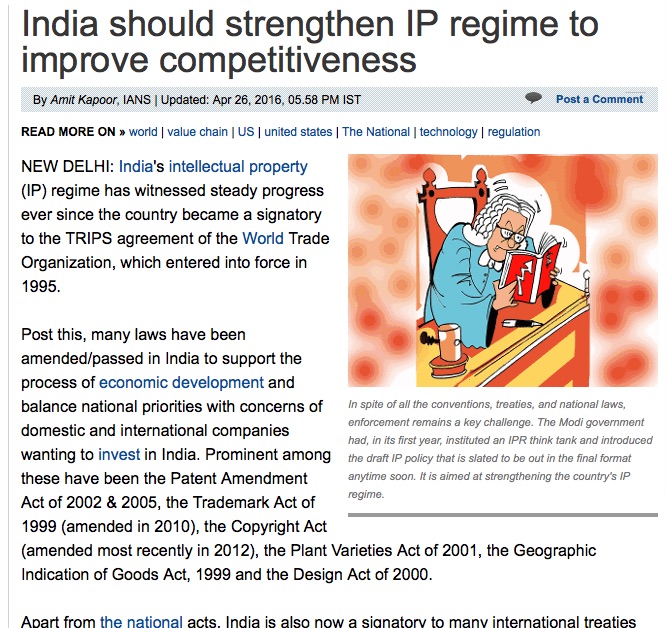 India’s intellectual property (IP) regime has witnessed steady progress ever since the country became a signatory to the TRIPS agreement of the World Trade Organization, which entered into force in 1995.

Post this, many laws have been amended/passed in India to support the process of economic development and balance national priorities with concerns of domestic and international companies wanting to invest in India. Prominent among these have been the Patent Amendment Act of 2002 &amp; 2005, the Trademark Act of 1999 (amended in 2010), the Copyright Act (amended most recently in 2012), the Plant Varieties Act of 2001, the Geographic Indication of Goods Act, 1999 and the Design Act of 2000.

Apart from the national acts, India is also now a signatory to many international treaties and conventions which showcase the country’s commitment to IP. However, India is at the bottom of global indices like the Intellectual Property Rights Index of the US Chamber of Commerce. It is placed 37th out of 38 countries considered for the index in 2016. It has also been put on the United States Trade Representative’s Special 301 report under ‘priority watch list’ for 2015 and has been there for a significant period.

In spite of all the conventions, treaties, and national laws, enforcement remains a key challenge. The Modi government had, in its first year, instituted an IPR think tank and introduced the draft IP policy that is slated to be out in the final format anytime soon. It is aimed at strengthening the country’s IP regime.

However, a robust ecosystem for innovation can only get created when there is clarity on regulatory issues at the national level. There are many issues here which need resolution.

For instance, take the recent case of Ericsson and other domestic mobile phone manufacturers in India, which have gone to different judicial forums like the Delhi High Court and The Competition Commission of India to resolve an ensuing patent.

Also, DIPP has recently issued a White Paper on standard essential patents for public consultation which seeks stakeholder response to a set of 13 questions. There is a specific question about whether royalty rates should be decided by the government. Ideally, the government should stay away from royalty rates as these are best left to different standard setting organisations, individual parties, and courts to look at.

The question also arises: How much of the IP is being produced domestically by companies in India? The answer is very little. Also, in the global value chain for handset markets, India adds very little value. The SSO (standard setting organisation) in the present case has already adopted an IP policy and addressed most of the issues that the DIPP paper seeks to resolve.

Another key point is that there is an inverted duty structure in the market for handsets as printed circuit boards (PCBs) attract two percent duty while finished handsets attract 12 percent duty. This is to point out a person does not manufacture in India simply because he can import components like PCBs at a marginal rate from more competitive markets abroad. This de-incentivises the production capability for programmes like Make in India and emergence of clusters around ESDM (Electronic System Design &amp; Manufacturing) sector.

Another key point pertains to the issue of states and improving their innovation and creative class landscape. At present, India lacks a culture of protecting IP. Also, IPRs are not very strongly enforced. Often one sees people buying and watching pirated CDs and DVDs and even books being sold on the crossroads at a fraction of the original.

States can be made partners in delivering programs in universities, colleges and even at vocational training institutions to look at the issues of IP and creation of a culture of IP for future generations. Capacity building around IP issues is a must for individual entrepreneurs and the MSME sector. Similarly, the states can formulate their own innovation policies which offer some protecting of IP of companies and entrepreneurs investing and looking at protecting their rights in India.

A question which often arises is what is the need of making laws and systems such as the ones enumerated. The primary reason is that it helps in the attraction of capital investment and technology which contributes to helping the economy become globally competitive.

In the longer time-frame, better IP protection helps companies and institutions gain future competitiveness. India should over the next few years try to strengthen the regime by capacity building and help streamline its trade policy to suit its overall objectives. It should also get out of the way where markets can function well in the absence of regulation.